How To Deal With Stressful Conversations 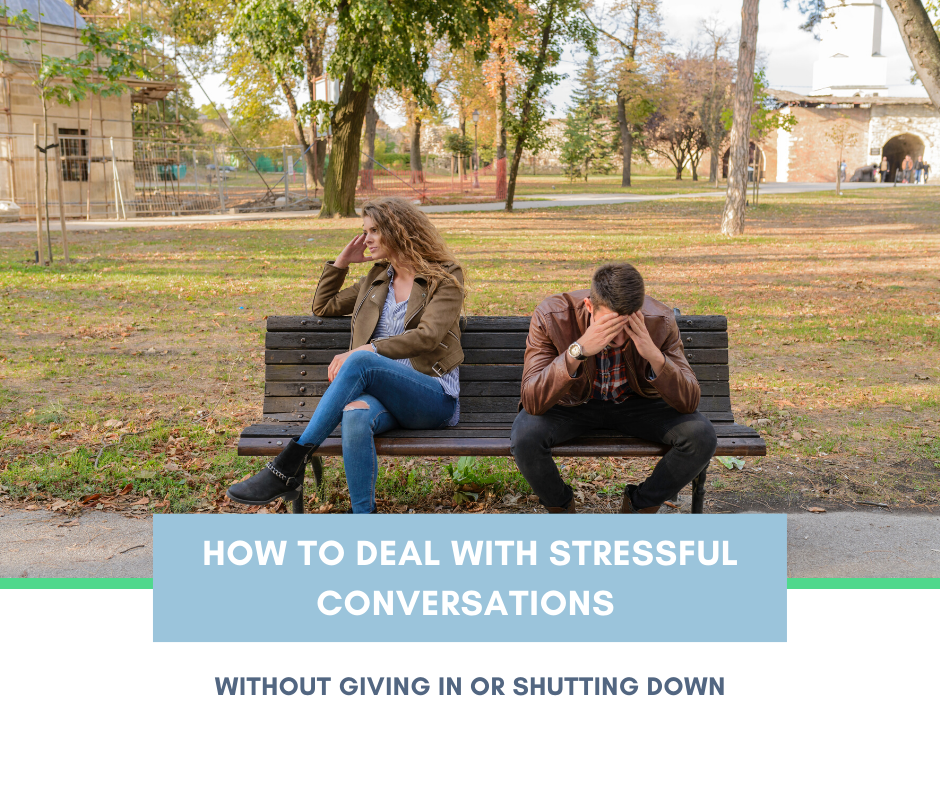 If you’re intent on getting people to do what you want you may experience the resistance that naturally occurs when we try to force an outcome.

If you start with creating a quality of connection with no other agenda, both people are more likely going to get their needs met.

What does all that mean?

The concept sounds simple although this is not easy without guidance and a structure at first.

If we use a demand or if it sounds like a demand it makes it almost impossible for the other person to give us what we want. They are more likely to shut us down by walking away, saying something that surprises us or stops us in our tracks and the interaction has ceased without a resolution.

The biggest reason I have found for not wanting to cooperate and sudden lack of trust is that they would have to give up their freedom and choice and that is way too great an ask.

They will protect themselves. Sometimes by saying they forgot, saying they don’t have time, by making excuses or with anger and frustration.

This can be confusing, especially if at one stage there may have been an agreement. I want to emphasise that if that agreement was given via coercion, it’s been my experience that I pay dearly for it in the long run. Either by confusing conversations that go nowhere except to frustration or by another disagreement.

TEST RUN
Check out your request by asking yourself, if they don’t do what I’ve asked, how will I feel about that?

If I feel annoyed then I know its not really a request it’s a demand in disguise. The usual disguise for a demand is where a “please” is said at the beginning or end of the sentence.

For example-KIDS/TEENS-Please get to bed at 9pm tonight you have school tomorrow.

This is likely to be heard as telling someone what to do rather than asking if someone is willing to do it.

Having your child’s best interest at heart might be your intention yet when you put it in this way, its my experience they will hear it as a demand and decide to do one of two things:
1. Comply at first to retaliate later
2. Retaliate with a big fat NO by either saying so or by just forgetting or doing something else to draw your attention to.

I see it as too costly for us both.

Hearing it as a request, it might need to be said like this: I have read a lot about amounts of sleep needed in teens and you need 8 hours a good chunk of which needs to be before midnight. I would like you to turn off devices at 7:30, get ready for bed at 830 and be ready for lights out at 9. Would you do that tonight so we can see how it goes?

With younger kids and teens you may need to manage these steps quite closely as I dont think going to bed is top of mind for them.

If you get stuck and find yourself going into that familiar pattern of hear we go again or they never listen etc.

Go do something else then come back later and journal your original thought and place a need next to it to ground it in what’s most important to you. If you cant think of a need just write What you want and Why you want it.

A ONE ON ONE SESSION FOR YOU THIS MONTH

If you stop yourself from saying what’s really on your mind because you don’t want to hurt or offend someone it might be time to get some new tools to keep in your back pocket for those moments you need them.

Keeping quiet to keep the peace is sometimes costly to our well-being with sleepless nights, unhealthy snacking, headaches and medications that harm our gut.

If you’ve ever felt like saying the stuff that has been simmering down deep inside and you want to know how to say it in a loving, respectful and connected way, grab my 1 on 1 session for only $105.

I help business professionals resolve conflict by communicating effectively so they can protect the things that matter most– in the workplace and at home.

Even in the movie Groundhog Day, Bill Murray got it; little by little. Just in case you missed it and were focussing on the frustrating repetition…he discovered his heartfelt voice making his relationships more fulfilling.

Sometimes we go through a lot before we reach out for support; painful misunderstandings, unnecessary upsets or walking on eggshells.

If you’ve ever wondered what it might be like to be able to
♥ reclaim your personal power to come out of the darkness of worry, failure, shame or guilt that has plagued you
♥ find your truth, have the courage, manner and technique to voice it.
♥ remain calm and clear in moments of emotional intensity (yours or theirs)

If any of these resonate, this is a place to start, where you will be met where you’re at right now.

We don’t need to go back into past events, we start moving forward with what’s current and important.

We get together on Zoom and its recorded so you will always have it to refer back to.

Choose Consultation Option after clicking the button below

How to make difficult conversations painless and productive.

ARE YOU CONSTANTLY WALKING ON EGGSHELLS?

Is it becoming difficult to talk to your boss, partner or family member?

I have seen otherwise savvy, intelligent professionals self-destruct because of the dismissive way their manager or family member have treated them.

If not speaking up, talking louder or talking over someone to get your point across has started to become your go to method of conflict resolution, please put your details in the space below where I will give you 3 things you can do instead.